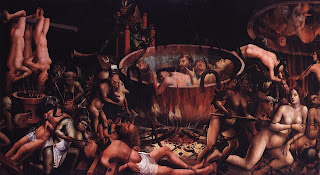 ﻿
God does not love everyone, and God positively detests you.  The Good Lord wants you to suffer.  God wants you to be in pain.  God hates the sin – but even more, He despises sinners like you.


You are going to Hell, and there is not a damn thing that you can do about it.  God loathes a human who believes in Him merely to gain a chance at Heaven; those sanctimonious opportunists will be tortured in the Afterlife for all eternity.  Someone who believes in Christianity merely to gain entry into Heaven is only a fair-weather devotee. God reviles a disciple who gets down on his knees only because he wants a chance at Paradise.

Sure, you could beg and beseech for lenience, but the All-Powerful doesn’t listen to frauds like you.  You could try to change your ways, but God would see through such phoniness – and hate you all the more. You could do good deeds for the rest of your brief life here on Earth, but God would see the insincerity behind your motives – and make you suffer even more after death. You can give every cent you have to the poor – and you will still end up scorched and scalded in Hell, but with empty pockets.  No matter how much time you spend in church, you are never going to Heaven.

The more you pray, the more you just annoy the Almighty.  Repent all you like – but God is not going to be fooled by your performance.  God is as nauseated by your fake piety as everyone else in your life.  The more you bow your head, the more God just wants to slap the crap out of you.  The Almighty is repulsed by your supplication – and, to be honest, who wouldn’t be?


Like an insect crawling across a trouser leg, your very existence only serves to irritate the Almighty – so you’re certain to be incinerated no matter what.  You are as helpless as an ant beneath a sun-drenched magnifying glass – God wants to see your limbs jerk and twitch as the hellfire sizzles and shrivels your tendons.  You could become an atheist and you’ll certainly go to Hell; or go ahead and believe in Christ as much as you can stand, and God will send you to Hell anyway: it just doesn’t make any difference whether the ant beneath the looking-glass believes anything – the critter is still going to end up smoldering.


You, sir, will end up in a bottomless pit and fire and brimstone – and there is no way to change such destiny.  The more misfortune you experience here in this life, the more certain that you will be tormented in the next world.  If your Maker really loved (or even liked) you, do you really think that you would have been subjected to quite so many maladies & miseries in life?  God knows what worthless asshole you really are - and there is no way to alter this fact.  There is no hope, no hope for hypocrites like you, so get used to it. There are no 72 virgins waiting for you in the Promised Land no matter what – the only thing you can expect is further torment beyond the grave.  Let’s face it, some souls just aren’t worth saving, and like a piece of underwear that has seen a few too many skid-marks, your shit-smeared personality is certain to be kicked into the fire pit.


No grace is going to happen for you, pal.  God is already giggling about the agony He’s got in store for you.  God is already snickering about the anguish that is awaiting you.  God is already smacking his lips at the thought of your gonads sizzling on the grill.  If you ask for mercy, you’re only going to get it worse.  You can’t get on God’s good side no matter what; you’re only going to make things worse for yourself – so don’t even bother trying.  Better to stand on your feet and realize the absolute horror of salvation than to grovel and ass-lick because you are duped by optimistic feelings about the realm beyond.

God has the kind of smirk that says you are going to burn in Hell no matter what: your testacles are going to be toasted and your foreskin is going to flame.  The Good Lord wants to see you humble yourself a few more times while He gets the furnaces the right temperature for you.  You screams are going to be more delicious than any Heavenly choir.

Truth be told, God is a bit of a sadistic fuck, but what the Heavenly Father can’t tolerate are all those smug bastards who think they are going to Paradise.  Mark my words, God is going to take you down a notch or two – and those notches are going to end up in your self-righteous flesh, my friend.  God wants to see you on your knees – the Lord wants to hear you squeal.


You are going to burn in Hell for time without end - and there is nothing you can do to change your fate.  No redemption for you, chum.

God is counting the days till you die.
Posted by Mr. Mean-Spirited at 6:17 PM