THE FRAUD OF PHILANTHROPY 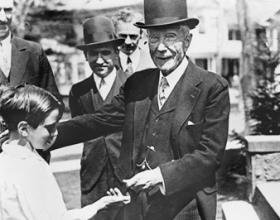 Philanthropy is just about the cruelest thing that the rich can do to the poor. The ruling class would have you believe that philanthropy involves donations to organizations claiming to eliminate societal misery, but closer examination of the practice indicates that philanthropy actually perpetuates the very same social misfortunes that it is supposed to eradicate. Although corporate generosity is supposedly done for the benefit of the general public, such philanthropy is actually a technique to keep the average American living in a state of financial servitude. Like a zookeeper with a treat in one hand, philanthropic giving is merely a con that the ruling elite plays upon a poor creature. Consider philanthropy as a sort of predatory generosity.

1: Philanthropy is all about celebrities. Philanthropy is not about the quantity of money that is supposedly donated, as much as an issue of who is doing the giving. While an ordinary citizen might offer a couple dollars to a homeless man for a meal, that action never seems to constitute philanthropy, but when John D. Rockefeller flung a dime into the hand of an impoverished child, then that is not only a philanthropic act—but also a photographic image to be eternally celebrated in mass media. Since the actual dollar amount that ever reaches the impoverished recipient is often astonishingly insignificant, it cannot be the exact sum of money that defines an act of philanthropy. Rather, the fact that the cash comes from the super rich is what transforms the pittance into a pretty, philanthropic penny. Charity is part of the posh lifestyle that transforms a person into a celebrity. It's always been fashionable for every well-bred gentleman to have a cause. Philanthropy is not something you can do; instead, philanthropy is something done to you. Philanthropy is nothing than an ordinary person can attempt—philanthropy is always done by your betters.

2: Philanthropy is a scheme to gain publicity. Just as the notion of a Rockefeller handing out coins was crafted and created by a public-relations executive—all so-called philanthropic acts are really done just for the good press. The philanthropist always waits for a video camera before his handlers tell him to begin giving. It is only when a member of the ruling clique gets caught in some extremely unethical business activity (like, say, Rockefeller crushing his competition) does the "robber baron" finally begin a calculated campaign of philanthropy. When a member of the upper crust is truly desperate to hide his sleazy practices, philanthropy will be directed toward something photogenic like child-welfare. A philanthropic act does wonders to draw media attention away from some impending scandal.

3: Philanthropic acts are really scams to gain a tax write-off. When some fast-food chain offers to give a percentage of the sale of every greasy burger to some benevolent agency—to a non-profit organization having some involvement with children, of course—the multinational corporation will use that supposed donation as a tax dodge. Strangely enough, instead of actually reducing a corporation’s net wealth by the total amount of money given away, the charitable giving always seems to end-up improving the company’s bottom line—because the sum is designed to manipulate the numbers on the tax return, rather than to help-out some unfortunates. Somehow the smug philanthropist always knows how to manipulate the tax code to his benefit.

4: Philanthropy is trick to raise prices. If a company really wanted to do something to benefit mankind, then the business would lower the price of the Wankerburger by the amount of the supposed contribution and allow each customer to make an individual decision about donation. Instead, philanthropy gives the corporation an excuse to raise prices; no customer can then legitimately question these higher charges because the extra money supposedly goes to such a good cause. Philanthropy is just an excuse that businesses use to charge you more.

Bill Gates, the founder of Microsoft, serves as the poster boy of the scam of using philanthropy as a pretense to increase the price of merchandise. Surely if Mr. Gates were really all that concerned about helping the impoverished, he would begin by lowering the price of his software; obviously, if Bill Gates were truly that interested in giving away his billions, he would not be charging so much for his commercial products in the first place. If Andrew Carnegie actually wanted to benefit humanity, it would have been far more efficient if he hadn't destroyed his competition in the steel industry at the beginning. If a company really were all that interested in doing "good," then surely it would have had better business practices from the start; instead, sham philanthropy is used to crush competition just as much as creating a monopoly. Philanthropy takes the element of choice from the consumer, and gives the business owner the privilege of making the decision about who gets the bounty.

5. Philanthropy is designed to perpetuate the financial dominance of particular families. Philanthropic acts are never about putting more money in the pockets of the average shopper; instead, all philanthropy does is to maintain control of financial resources by the same ruling elite. Philanthropy is all about preserving the control of wealth. Curiously enough, the super rich never just give away money—that would be too easy; instead, the ruling elite creates giant tax-exempt foundations in order to administer their supposed largess. When Rockefeller finally got tired of handing out coinage to ungrateful urchins, the family set up a foundation that, even to this very day, still dispenses the charitable handouts of this particular bloodline.

Somehow these charities never give away all of their assets and just disappear; in contrast, their agenda involves creating some permanent entity, a legal trust that dispenses a mere trickle of the interest as a cover for its other activities. These charitable foundations are the tools that the wealthy insiders use to perpetuate their control over a share of the gross domestic product. The tax-free entities become a means to perpetuate the financial domination over the complacent, consuming public. Philanthropy is just a sneaky way for a few fortunate genetic lines to maintain eternal, everlasting control over their ill-gotten gains. Charities are the ultimate expression of corporate control of the general public.

With philanthropists loose on the streets, you don’t need pickpockets. Beware of rich men bearing gifts.