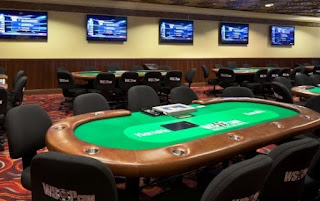 If you want to understand human behavior, you need to look at things coldly – and, perhaps the least emotional framework comes from game theory.  Social interaction is more like a poker tournament than any sort of group hug.  A convincing pokerface is a necessary thing if you have the misfortune to be surrounded by other people.

Existence is not about giving to the unfortunate, as much as “making a killing.”  A modern American citizen does not contribute to charity, but bides his time until he can “cash out.”  A wise man cares nothing about the greatest good for the greatest number – no, indeed; an enlightened mind is only concerned about “looking out for number one.” (Even the obvious English-language idioms put the lie to empathy.)

You might well ask the initial & immediate question: if you know that other people are out to take advantage of you, what is the best strategy to avoid losing everything?  If you know that the other people in the game are out to cheat you, then what is the best strategy to keep your neighbors from stealing your grub-stake?  When you come to understand that you are on the verge of becoming a victim of your fellow man, then there are just two realistic strategies: (1) withdrawing before it is too late or (2) cheating your opponents before they can cheat you.

Retreating only becomes a valid strategy is you have already formulated a long-term exit strategy.  You need to have a hideout at the ready if you are secretly planning to make a run for it.  Escape is much like murder – some things must be premediated if you really want to get away with it.

If other people are trying to swindle you, then it is perfectly legitimate to scam them back.  A successful lie often requires you to utilize a strategic quantity of deception: if a player can get away with mere misdirection as in a card game – then, by all means, use this penny-ante bamboozle.  In everyday life, however, sometimes it is necessary to go all-in when it comes to misrepresenting yourself.

Be honest to yourself, but hostile toward others.  Be sincere in your thinking, but insincere in your speech.  Be genuine only when solitary, but be guileful in the midst of society.  You can only afford to be authentic when you are alone.

Just as bluffing is an essential element of any game of poker, so trickery is going to become any eventual part of your societal existence.  If other people give you misinformation, then you need to mislead them back. – in spades.  The truth is merely something that will ultimately be used against you.  At a moment of history when everything around you is an elaborate fabrication, then you need to be skilled enough to fake you neighbors out.

You might well be thinking: what, then, is the optimal survival strategy if you do not know for certain – but only suspect that others are out to get you?  Based solely on how you have been treated by human beings in the past, you can draw some pretty reasonable suppositions about human behavior.  But even if you have no direct evidence of the actual duplicity of your neighbors, then you actually are in even more immediate danger.  You need to operate from the premise that your powers of observation are not what they should be – you should have already seen them scheming.  You need to realize that your very own situational awareness has already let you down.  The only viable strategy is to deceive everyone – friend and foe alike.  From this point in the game, you have got to remain resolute that everything – every last thing- you now utter is an untruth; you need to resolve that everything you might disclose about yourself is a calculated deception.  You cannot just walk away from the game if there remains a possibility that you are about to be ambushed – after all, you can’t just leave the table if your fellow players are scheming to jump you in the parking lot.

You need to recognize that those people closest to you will know your vulnerabilities – and use those very same weaknesses against you.  Those acquaintances that care about you the most will, naturally, be the very same friends who take advantage of you the most.  The more that someone professes to care about you, the more you need to suspect that they are bluffing.  You only lose when you come to believe what other people say.  There is no greater dupe than a fellow who actually imagines that other people will be honest with him.

In your day-to-day existence as much as in the nearest Indian casino, you will need to con other people before they can cheat you.  A professional gambler always operates from the awareness  that daily life is just another game – albeit with somewhat different stakes.  The player who puts out the greatest misinformation ultimately wins in the end.  An effective lie is always stronger than the absolute truth.

You might well ask the age-old question: how do you win at life?  I have a one-word answer: cheat.  A successful gambler is always willing to do anything to win.  Obviously, the most certain way of “getting yours” is to take someone else’s.
Posted by Mr. Mean-Spirited at 6:20 PM 4 comments: