VISITING THE REMAINS OF BENJAMIN DECASSERES IN TUCSON 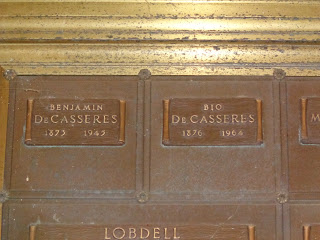 There are particular geographic locations that, for one inexplicable reason or another, seem peculiarly enchanting.  Certain places resonate with certain personalities.  There is, somewhere, a precise scenery that speaks to your soul.

No matter how many times I visit Arizona, the city of Tucson has always been an endlessly enchanting landscape.  Not a picturesque town by any account, but the kind of urban environment that hides the unexpected in dusty, run-down neighborhoods.  The more poverty-strewn the barrio, the more bewildering the material culture.

Like much of the Southwest, the city is a jumble of different worldviews, a place where alien belief systems collide with each other. This juxtaposition can make you feel like a something of an outsider – I have always liked that sense of not quite belonging anywhere. Any locale where one mindset crashes into another might well yield a kind of liberation of the psyche.

After an enchanting Sonoran-style lunch in the crowded, congested Mi Nidito Restaurant, I had a couple hours to slay, so I thought that I would visit the final “resting place” of Benjamin DeCasseres.  After all, there is no better place to kill time than in a cemetery.  DeCasseres’ cremated remains are interred in the South Lawn Memorial Cemetery in what is now South Tucson. Due to urban sprawl, the area to the south of the I-10 freeway has become predominately Spanish-speaking.  But when Bio DeCasseres first choose South Lawn Memorial to be the garden of remembrance for her husband in 1946, this real estate was still at the extreme edge of the city.

Benjamin DeCasseres’ schtick was a sort of scornful, sneering individualism.  This haughty self-awareness was provoked by way too much liquor and way too much reading of outré literature.   I tend to think of egoism as freeing of the Self from external influences - just like leaving the clogged, clotted, congested roadways of Tucson for a destination such as a largely empty cemetery.

Although his books are largely forgotten today, Benjamin DeCasseres was once known for his over-written, over-wrought, over-adjectivized, over-grown prose.   DeCasseres’ unique style-over-substance was an upscale nihilism, a genteel negativism.  A philosophy of individualism can only be conveyed in an ornate, opulent verbiage – as egoism using a casual phraseology will only read like something written by an adolescent.  And few American writers have ever cultivated quite such a luxuriant style - a way of writing that has gone out of fashion in our era of short attention-spans.   Not that DeCasseres would have cared all that much; I am sure that he would have erased any anxiety & unease about being passé with a round of drinks at one of his favorite speakeasies of New York City.

So how did the ashes of a man so intricately & so intimately associated with Manhattan end-up in the desert?  After the death of Benjamin DeCasseres, his wife wanted to get away from the depressing, discouraging streets of Gotham.  Bio DeCasseres needed a change of environment, and the winter warmth of Tucson became an inviting prospect, so she brought the cremains of Benjamin with her. For transplants then and now, Arizona is merely a waiting room between life in other places.

I don’t know what DeCasseres would have made of modern Tucson, but I am pretty certain that he would have been surprised to find his physical remnants in such a place.  The desert is a landscape where human beings do not truly belong – a terrain where most people are just passing through. 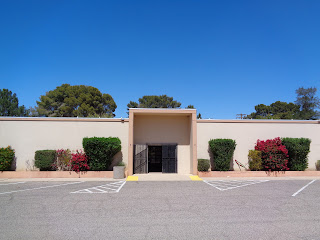 Human beings were swarming & scurrying with their usual noises in South Tucson when I went looking for the DeCasseres monument at the South Lawn acreage.  Since the body of Benjamin DeCasseres was cremated, I knew that his remains would have been shoved into a niche somewhere on the cemetery grounds, but the exact spot is not all that easy to find.  His cremains are located in something called the Skylawn Mausoleum, a building that looks as if it has been desultorily remolded since the ashes were first deposited.  My presence disturbed a couple nesting birds; they shot-up into the sky with a sound like the snap of a rubber band.  In an alcove on the Western side of the columbarium is a wall of bronze niches.  DeCasseres is located right at the top, right next to the entrance - rather difficult to see if you don’t know where to look. The ashes of Benjamin are beside those of his wife, but in the South Lawn Cemetery, everyone gets their own individual compartment.  When things are all said and done, there is only room for one urn in each niche in the columbarium.

I was fortunate that, during my brief visit, there was no one else in the mausoleum; my fortuitous solitude was only a temporary respite.  I got back in the car, twisted the key, turned for one last look behind me, and rolled into some serious traffic.  Everyone had their stereos blasting. 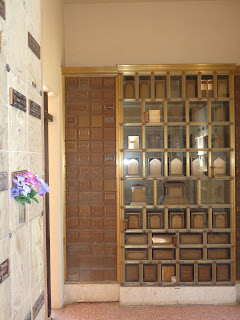 Posted by Mr. Mean-Spirited at 1:50 AM No comments: